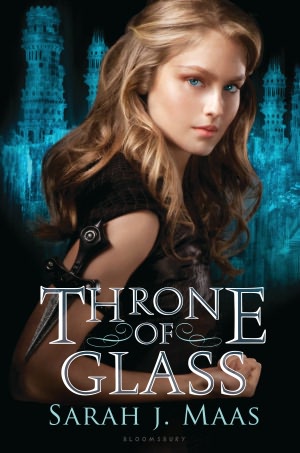 Sarah J. Maas’s Throne of Glass was an all-encompassing tale of mystery, intrigue, fantasy, romance and action. It was a book I thoroughly enjoyed reading, feeling at once comfortingly familiar (her characters and world building were just so darn likable), new, and enticing.

I became acquainted with Maas’ fiery heroine, Celaena Sardothien with the fantastic novellas that were released before the novel itself. Taking place several years before Throne of Glass starts off, they really developed Celaena’s character, letting the reader glimpse her deeper motivations and how far she has fallen at the beginning of the book.

The world that Celaena lives in is wonderfully articulated by Maas. The setting of her adventures was one I thoroughly enjoyed exploring; it is original and tied to its own myth and lore that will surely play a greater part in future books. In the novellas alone, she travels to several fully imagined lands that neighbor the country where she is known as the top assassin. She’s young, arrogant, and proud, which all leads to remarkably entertaining events, and made me appreciate her quirks even more, after her fall from grace in the beginning of Throne of Glass.

Throne of Glass begins when Celaena is released from a horrifying salt mine where she has been imprisoned for the past year. The dashing Crown Prince, Dorian, accompanied by a reserved yet ruggedly handsome Captain of the Guard, Chaol, has decided to let her represent him in a competition to find a protector for the dastardly king. The story unfolds as Celaena adjusts to life in the Glass Palace, struggling to fight her way to freedom, all while a dark mystery spreads, and her fellow competitors are murdered one by one, by a haunting presence that no one seems to be able to explain.

Celaena is a compelling lead character. She’s an assassin not by choice, but because she was plucked from her land when her parents were murdered by the King, and trained to be one. She’s intelligent, a survivor, definitely rough around the edges, but she has a soft spot for books and beautiful clothes, and is more sensative than her tough exterior lets on. I enjoyed seeing Celaena easily grapple with the other assassins, but struggle with her feelings for Dorian and Chaol. What I liked most about this character, is that you get to watch her come in to her own, as she struggles with opening her heart to trust, friendship and romance.

Throne of Glass was full of rich descriptions and suspense. It was just one of those books that had a collective quality that I can’t quite put my finger on, that made me not want to put it down. I loved the premise that magic had disappeared from this land once the king took over when Celaena was a child, and gathering clues along with her, as she tries to piece together the past. I’m really looking forward to reading more about Celaena, to have another chance to linger in Maas’ captivating storytelling, with the promise of more secrets and magic in her future.