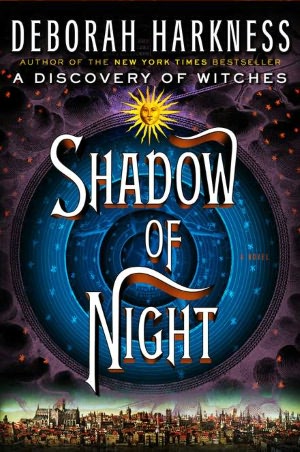 Shadow of Night by Deborah Harkness

Shadow of Night starts off where A Discovery of Witches left us. Matthew, an ancient vampire and Diana, a witch brimming with untapped power and promise, land in a tangled heap in Matthew’s lodge in Elizabethan Oxford. They’ve traveled back in time to give Diana a chance to learn how to control her burgeoning magic. They’re also looking for Ashmole 782, a sacred book that holds the secrets of the origins of supernatural creatures, which is being hunted voraciously in the present by their adversaries. If it falls in to the wrong hands, untold horrors could unfold.

It was fascinating to see Diana contend with Matthew’s patriarchal whims in the 16th century and see how his reverting to old ways affected their relationship. He falls back in with the mysterious School of Night, which contains wonderful historical figures such as Kit Marlowe, Walter Raleigh and George Percy.

While juggling Matthew’s new 16th century demands, and her desire to test her historical knowledge, Diana has to put her magical training on hold until she can pass believably as a contemporary Elizabethan lady. There is also a lingering sense of fear pervading the time period due to the fevered witch hunts of the day. Even in the past, Matthew and Diana are constantly evading danger. Harkness set a hard task before herself after such an engrossing first book, yet this installment kept me on my toes. Diana and Matthew’s growing relationship is a joy to read. Their dynamic is nuanced, and flawed; Diana says what’s on her mind in spite of the fact that it might prickle his ego. Matthew supports her to become who she’s meant to be, when she’s terrified of her own magical powers.

Deborah Harkness has outdone herself again with this sequel, complete with lively characters, stunning period detail and captivating intrigue. I couldn’t get enough! In addition to their historical journey we as the readers get to meet an entirely new cast in Shadow of Night, ranging from vampires, daemons, and witches to street urchins, emperors, and queens. The whole story was so engrossing, there were times when I wondered if Harkness herself had traveled back in history, or used witchcraft to make her literary world breathe as lifelike as this tale!

One thought on “Shadow of Night by Deborah Harkness”