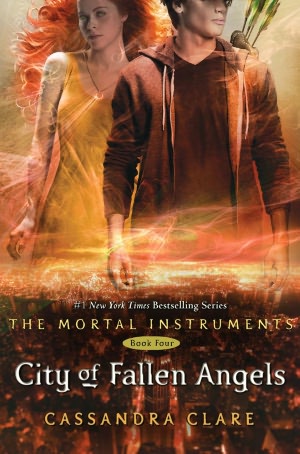 Before I started Cassandra Clare’s City of Fallen Angels, I was still running off a high from the last installment, City of Glass and I’ll be honest, I was slightly nervous about how Clare would manage to move the story forward after such climactic events.

The beginning of this book is indeed a little slower than her other versions, but it also fits nicely in to the pace she’s set up in this series, where Books 1 and 3 were rather epic and Books 2 and 4 set the scene for greater things to come. Her fast paced style of storytelling and her witty, approachable writing always keeps me coming back for more, which is why I’m patient with these more ‘staid’ installments.

In City of Fallen Angels, Jace and Clary are finally able to begin a real relationship together, that is until Jace begins pushing Clary away for no explicable reason (or is it explicable…). Clary is also beginning to train as a shadowhunter, although only physically; I wish she’d received some theory lessons or something, because I’m dying to learn more about rune lore and shadowhunter history. Much of this book focuses on Simon and the repurcussions of bearing the Mark of Cain. Alec and Magnus are predominantly on a European vacation for much of the plot, which is a shame, although in their absence we are introduced to several new characters. There is also another intriguing mystery that encircles the plot in this book, but I wish Clare had delved in to it earlier on in the narrative. Once the main characters begin really uncovering what is happening, the book becomes a lot more engrossing, ending on a crazy cliffhanger.

Even with this installment’s shortcomings, I still love the world of shadowhunters that Cassandra Clare has created. The fact that it takes place in our own time makes it that much more appealing. Plus Clare’s imagination lends itself to multi-dimensional characters, as well as a rich, alternate reality similar to the craftsmanship of J.K. Rowling, where we as the readers can easily imagine shadowhunters and downworlders existing alongside us mundanes.

It’s a world I want to live in and continually learn more about, so Clare has me hooked. Luckily, I have a hunch my patience with Book Four will pay off in the recently released City of Lost Souls, which promises to be action packed and delve even deeper in to the myth of shadowhunters.

2 thoughts on “City of Fallen Angels by Cassandra Clare”